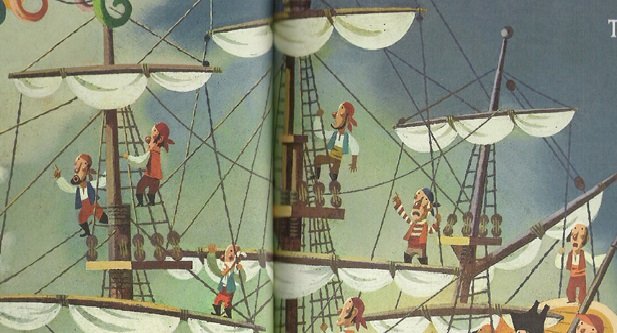 Two of my two all-time favorite Holiday Season picture books are by members of my own children’s writing group. One is Santa Knows by Cynthia and Greg Leitich Smith, illustrated by Steve Bjorkman (Dutton). The other is the new  A Pirates Night Before Christmas, by Philip Yates, illustrated by Sebastia Serra (Sterling .)

Another is the classic A Child’s Christmas in Wales by the poet Dylan Thomas,  because of the fascinating wash illustrations by the great Edward Ardizzone. (David R. Godine, Publisher.) But that is for another post someday.

But how amazing is that when the first two quintessential Christmas picture books you can think of happening to be by writers from your own tribe,  in your own town?

“I wrote the whole story by asking questions and putting myself into this world that is uniquely the pirates,”  he told Cynthia Leitich Smith in her children’s and YA literature blog Cynsations. “That’s what writing successful picture books is all about — asking the right questions and letting the answers come in the most heartfelt way. ”

They would be too bad and mean to deserve a visit from Santa,  so they would need their own ornery ‘sea dog’ version of Santa — and he would drive a marine sleigh pulled by seahorses!  The rhyme structure of Moore’s classic Night Before Christmas poem in anapestic tetrameter (also found in Dr. Seuss’s beloved Yertle the Turtle and Cat in the Hat, Yates told Smith. “It’s a breezy, whimsical, magical form that just flows beautifully and is highly contagious when read out loud.” 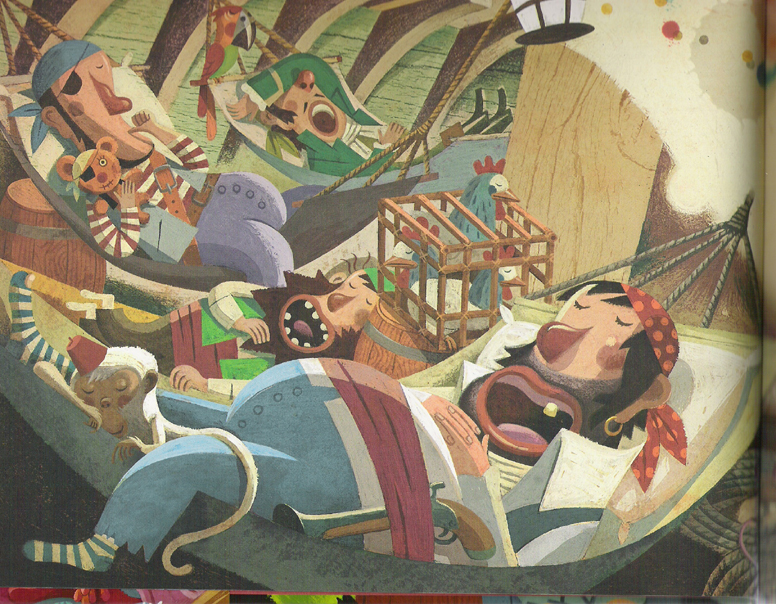 To prepare to put new language and new word pictures into old poetic forms, Yates steeped himself in pirate lore — “the grammar, the slang, the history, the parts of the ship… ” Yates said in the interview.

Actually composing the poem took him only two days. He sent the ms out to five publishers and received offers from three!

Serra lives in a village on the  Mediterranean coast near Barcelona.

Children’s book illustrators and pirates have a special relationship with each other that pre-dates Disney and Johnny Depp. Howard Pyle and N.C. Wyeth leaps to mind, as does Gustaf Tenggren.

Serra’s pirates evoke wooden toys, marionettes, and bright-colored sea creatures.  So they’re sweet and child-like, as toys often are but there’s also something oddly menacing about them, as there should be — particularly that  ‘outlaw Santa’ who goes by the name, Sir Peggy.

Pirates — even cliche pirates —  are never cute — not in the best depictions of them that resonate with children and the child in all of us. Robert Louis Stevenson knew this.  Long John Silver had us wondering up until the very end of Treasure Island if he was a bad guy or a good guy. We were never sure, not even after turning the novel’s last page, although he usually treated young Jim Hawkins decently.

As in the word portraits of pirates, pictures of pirates must include some minor key notes — disturbing elements  in the colors, details of the caricatures, or the ‘spirit’ behind a scene (even when the Christmas socks are hung from the bowsprit with care.)

Pirates in children’s picture books can be poignant and a tiny bit endearing.  But if they come off too cuddly, they’re just wrong!  Children get this.  And so do Yates and Serra.

Serra’s pirate ship from “The Pirate’s Night Before Christmas”

Yates talked with us about the illustrations that appear in his book.

When you were writing, were you imagining the pictures in the book-to-be? Did you kind of visually  “thumbnail” the whole work in your head?

Or did you mainly focus on the language of the poem — already sort of knowing that the stanzas would work as a rollicking, page-turning, picture book experience.

A lot of the creation of the narrative involved inserting pictures in my head as I wrote.  I knew the structure of the poem’s anapestic meter so well that I trusted the language to guide me on the voyage. The poem already works and has stood the test of time for nearly 190 years. Since the language was already there, I just had to pop in the images that worked best.

I immersed myself so thoroughly in the pirate world that the images came first and guided the language. For example, in the opening stanzas, I couldn’t hang stockings from chimneys so I had to research how pirate ships looked and where a stocking would hang and it wasn’t until I came across a picture of a bowsprit that  I realized it was a perfect place to hang a stocking.

But with what? Well, I found illustrations of ships that used tar to make repairs and since tar rhymes with that, the two came together in perfect synchronicity.

I’m not an illustrator, but the book truly was guided by the  “picture” first, the “narrative” second.

From “The Pirate’s Night Before Christmas”

Were you permitted any kind of communication with Sebastia Serra during the illustration process?

The whole discovery of Serra was simply amazing and all credit is due to my editor at Sterling Publishing. Serra had submitted a portfolio to Sterling and one look at his artwork and they knew he was perfect.

All the communication regarding the artwork was done between Serra and Sterling, or Sterling and me. I never spoke to him by phone,  communicated by email, or anything. It would have been heavenly to talk to him, but sometimes you have to trust your art director and this was a case where I totally put my trust in them from the start.

I had very little to give since the art was so splendid. I almost think it was eerie how perfectly he captured the world I envisioned. But there were tiny things like “I want to see more seaweed on Sir Peggedy,” or “His tooth needs to be golden,” since this was boldly expressed in the verses themselves.

I also wanted more people of all colors and races because pirate worlds were pretty diverse when you think about it.

Any insight into why your editor at Sterling selected  Sebastia to illustrate?

His artwork was modern, moody, had an edgy quality to it that was appealing. Similar to Lane Smith, I think. Lots of clutter, but I mean that in a positive way. Detail upon detail. He could also handle crowds of pirates in one picture, which, when you look at the illustrations, you can see this was necessary. They were also struck by the world he had created on his own with my language as the starting board—the monkey running around, the fish hanging on the Christmas tree, the treasure map with its unique geography. It was all in the details.

‘Sir Peg’ with the men. Illustration by Sebastia Serra

What was (is) your reaction to his art for the book when you saw it?

I was overwhelmed, to be honest.  As I said earlier, it felt like some telepathic thing had been going on between us. After seeing all the illustrations together for the first time, it almost felt like he had looked over my shoulder the whole time I was writing it, it was that spooky. But mostly, to be honest, was the feeling that I had accomplished what I set out to do—I had given him enough of this world so that he could go off on his own and expand it and give it his own twist.

At one reading recently, a parent came up to me and she thought I had done the illustrations and was surprised when she saw Serra’s name on it.

She said that the language and the visuals so perfectly meshed and how did it manage to come out without me even being in the same room with him. I was also proud because now he has several assignment offers on his table, thanks to the Pirate’s success.

Have you done any kind of teamed promotional activity with Serra? Or are there plans to team the two of you somehow on the promotional circuit?

Well, Sebastia’s in Barcelona, Spain and here I am in Austin. He has promoted it as best he can, but I imagine that it’s difficult to translate Clement Moore’s poem from English into Spanish without messing with the rhyme or meter in some way. I imagine the story can be told successfully in Spanish because the pictures are so great. I do hope to meet him someday and he is eager to team up again on another project, but now it’s difficult for both of us to get together.

[Serra created the illustrations for the book with pencil and ink on parchment,  then he digitally colored the scenes. See the interview with artist Serra in the next post.] 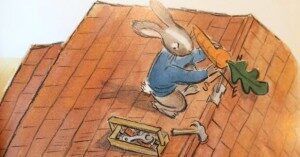 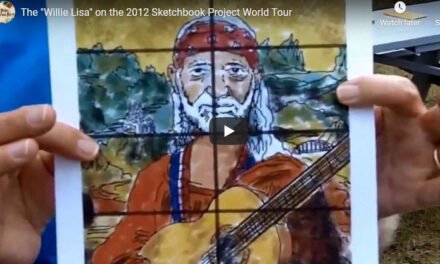 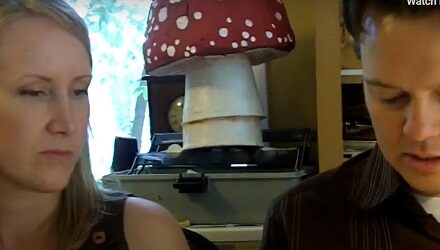 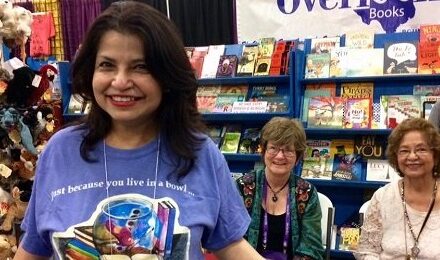