Poet Liz Garton Scanlon and Illustrator Marla Frazee talk about their many months of collaboration with each other and Beach Lane Books V.P. and publisher Allyn Johnston who was their editor.

Guests and speakers arrived from Texas and everywhere for a day of inspiring presentations and professional critiques of manuscripts and portfolios.

“The most expensive people — all  those who were trained by the great editors Ursula Nordstrom and Margaret McElderry are gone,” agent and former editor Mark McVeigh said in his rivetting keynote,  “Defending Your Muse.”

Still children’s publishing is  “not an industry in ruins, but in transition,” he continued.  He spoke about the emerging digital media and mobile media (Kindle, iPhone, etc.) marketplace.  But he kept returning to the sovereignty of language, individual creativity — and the Emily Dickinson poem he keeps in his wallet.  You can read  Mark’s recapping of his time with us in Austin and see the full text of the Dickinson poem  on his agency blog .

Later in the day  Curtis Brown agent Nathan Bransford elicited a gasp or two with his comment that he sees 15,000 to 20,000 submissions a year and might take  four to five clients per year from that pile. Yet his presentation hit inspiring notes.  He refers to the Austin conference in his publishing news packed- blog.

Liz reads one of Marla's e-mails

“Designing the ‘page-turns‘ is the most important thing,” asserted two-time Caldecott Honor illustrator Marla Frazee in an extraordinary presentation on the the picture book creation process.

“Use the page turn in the narrative when you want the mood to shift and your images to really stand out,”  she continued.

“Save diagonals for the most dramatic parts of your story. They’re like exclamation marks!”

Marla demonstrated how she filled the imagery for  All the World (2010 Caldecott Honor book penned by Austin poet Liz Garton Scanlon) with imagery from her own life  — landscapes of the central California coast,  her grandfather,  a favorite cafe — even the outdoor chairs and tables from the student union of her alma mater — props, settings and people that mattered a great deal for her.

A wonderful interview by Julie Danielson in her blog Seven Impossible Things Before Breakfast will give you a sense of the presentation by Marla and Liz and contains much of the same imagery.

In a special breakout session with the illustrators Marla discussed the artist’s voice, characterization and setting as the  foundation for illustrating books for children.

“I’ll start with a sketch trying to get to know the character. It’s about digging into the character.”It doesn’t have to be complicated. If you can get the reader to feel the emotion your character is feeling,  you’ve won most of the battle.”

As for setting,  details are important. “It should feel like you’re opening up a world.

“It’s really a matter of putting the time in.”

spread from "All the World"

Illustrators had their own portable building to hang out in. Left to right around the circle starting with Christy Stallop are Amy Farrier, Clint Young, Mike Benny, Don Tate, Kim Edge, Jamie Adams, Erik Kuntz and Diandra Mae

Here’s an Austin SCBWI round-up (so far) of blogposts on the conference:

Marla Frazee shows an early storyboard for "All the World"

Rumor has it there was a national SCBWI conference in New York City that same weekend.

OKAY,  it wasn’t a rumor.  It was the giant Winter Conference. Here’s the SCBWI team blog coverage of that major annual event that somehow messed up and booked the same date as ours.

Author-illustrator Mark Mitchell hosts this blog and teaches the  self paced course  Make Your Splashes; Make Your Marks! Drawing and Painting for Children’s Book Illustration.

Scene by Marla Frazee from "All the World" 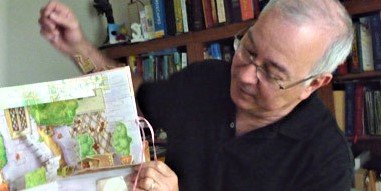 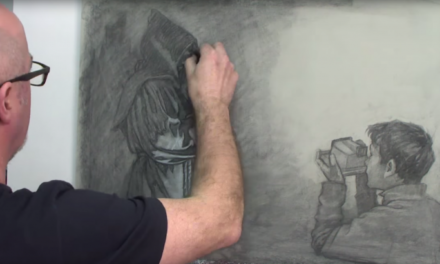